Found a reference to Amazon selling 1000 Xbox 360s for $100. Which is what one would be worth to me. So I showed up and tried it, figuring that I wasn't going to get one of these: 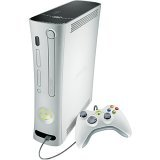 However, I was interested in how the process worked and also wanted one of the alternate items. I was logged in to my Amazon account on both Internet Explorer 7 and FireFox 2. Things worked fairly normally until about 10:59, when the system became totally non-responsive for about 10 minutes and not very responsive (meaning I got 1 session to work but none of the others) for 15.

I was disappointed that Amazon didn't have something showing on the screen. On the one hand, that might add to the problem of not being able to respond. But on the other, it seems like they could have sent a large image to folks saying that they hadn't won. Why large? To stop people from being able to hit refresh quickly.

Guess I don't as much about the intricacies of TCP/IP as I think I should. I'm not sure what's possible - limiting sessions to one per IP # to stop people from opening multiple tabs, etc. Maybe Amazon was doing that. But having the browser time out without any feedback over and over was frustrating. The first two times it was OK - "yeah, there must be a lot of people doing this" - but then it was "Wow, they need to plan better".

Relevance to local businesses? Well, there is some, actually. If I were running an antique store, there would be various ways of using my display case. I could put items on the floor and post ads as I did so. Certainly that would seem to be the efficient thing to do. But in terms of promotion, you could get a two-fer:

What do you get out of this? Well, the people who are going to stop by without knowing what you have are going to stop by. No disadvantage to them. And the people who only come when you have something interesting to them will check your stock once a week. Now if you don't have anything that they like, they're not coming in. But wouldn't you rather have them checking on you? Making it a part of their routine?

The alternate item on Amazon?